Stories from the Field ... 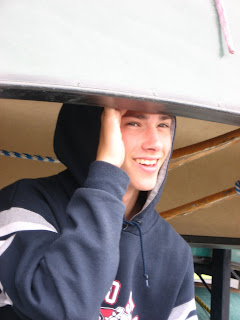 A Conversation Neither of Us Wanted to Have

Zac stood there in front of me asking what I thought of his hair. It's not that I hated his mohawk. It was pretty short and wasn't some obnoxious fluorescent color. But I knew what Bob Nass the camp director would think and I knew I'd agree with his general opinion even if I didn't share his level of passion over the subject.

We were at pre-camp counselor training and as with all our counselors Zac was being trained to be a defacto face representing the camp. As a camp our goal is to help parents who are entrusting their children to us to leave with confidence that their children would both be safe and would come home more mature in their Christian walk then when they arrived. Hair, for better or worse, communicates, and for that reason I was pretty sure Bob would demand that Zac's coiffe be summarily guillotined.

The sad thing is that this young man had no clue what was coming. What Zac intended to simply be an expression of his individuality was about to become a test of character. Bob didn't bring down the hammer as quickly as I thought he would, but when it finally fell and he told Zac that the Mohawk would have to go, Zac was left befuddled and perplexed. As he passed me he said with absolute resolution "I am NOT cutting my hair." He didn't see why it had to go. My point in relaying this story is not to make a comment about the propriety or lack of propriety of mohawks. This simply provides a set-up for the cool things that happened next ...

Before I move the story forward it would be helpful to relay to you that I met Zac at camp 3 years ago when he was 12. At that time God made it possible for me to get to know him and his family and I have had the privilege over that time to regularly disciple him. There have been some really hard, frustrating, bang your head against the wall moments over those three years. But in the midst of those challenges God has made it clear that he has plans for this young man. So back to my story ...

Knowing the friendship that I have with Zac, Bob asked me if I would talk to him about the hair situation. I was not really excited about it. But I dutifully told Bob I would talk to Zac. I procrastinated. That means I put it off. The day passed. The next morning rolled around. I was hoping Bob had forgotten and I could "forget" too. No such luck. Bob asked if I'd talked to Zac yet. "Uh ... Not yet." Clearly Bob was not going to forget. I took a deep breath. Time to man up. As is so often the case, the moment of truth was a providential "duh!" I couldn't avoid it. All of the Junior Counselors had just finished a team building exercise and were heading back inside and Zac and I were the last ones to turn to go inside. I looked at him and said "you and I have to have a conversation that neither of us want to have."

God was gracious. No sparks flew. There would have been sparks two years before. But God has been working in Zac.

What proceeded to unfold was a conversation that used the surface trivialities of hair style to deal with important biblical principles. What started as a conflict over hair resulted in a God honoring conversation about,

Don't misunderstand me, there was an internal conflict going on. But clearly Zac was in the process of mortifying his flesh and deciding to live for others rather than himself. This was a big moment and it was a privilege to be able to witness first hand. I felt as if I'd been granted a front row seat to witness a heart being changed.

We closed in prayer. A prayer that brought me to tears. Some might think this was just a conflict over hair. Nope. This was a profound moment of transformation.